Construction work for 2025 World Expo set to begin on Yumeshima 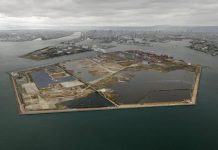 Construction work and other preparations for the 2025 World Exposition are set to start at the event’s venue: Yumeshima, an artificial island in Osaka Bay.

Yumeshima, which is part of the city of Osaka, is currently used as a container terminal and for other purposes. But a large part of the 390-hectare island remains unused, with Ichiro Matsui, governor of Osaka Prefecture, calling it “a negative legacy.”

A 155-hectare portion of Yumeshima will be used for the World Exposition. Of the area, some 30 hectares currently resemble mud flats.

As early as April this year, the Osaka Municipal Government plans to start reclamation of the mud flat area using ¥13.6 billion earmarked under a supplementary budget, aiming to complete the work in 2022.

Subway operator Osaka Metro Co. last month announced plans to extend one of its lines by 3.2 kilometers to Yumeshima, to link existing Cosmosquare Station with a new station to be built on the island.

A 2.3-kilometer portion of the extra section is already complete, with Osaka Metro now poised to work on the remaining part and the new station with the intention of completing the extension by 2024.

The company also plans to construct a 55-story building at the new station. The skyscraper, which is also slated to open by 2024, will include offices, restaurants and hotel rooms, according to the plan.

In addition, the city of Osaka and the Osaka Prefectural Government plan to launch an integrated resort that includes a casino on Yumeshima in 2024. The local governments will soon begin hearings from integrated resort operators and will narrow down candidates in summer this year, according to sources familiar with the matter.

The post Construction work for 2025 World Expo set to begin on Yumeshima appeared first on StoneNews.eu.