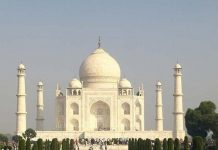 Renowned worldwide for its fine quality that can be credited for the Taj Mahal’s incredible beauty and the Victoria Memorial’s grandeur, marble from Makrana in Rajasthan is now Asia’s first Global Heritage Stone Resource (GHSR), as confirmed on July 19 by the International Union of Geological Sciences (IUGS), an international non-governmental organisation devoted to international cooperation in the field of geology. Interestingly, all of this has been made possible by a seven-member team of researchers and faculty members from Panjab University (PU), Chandigarh; Rajasthan University (RU) Jaipur; and the Geological Society of India (GSI), Bengaluru.

The GHSR designation seeks international recognition of natural stone resources that have achieved widespread utilisation in human culture and has earlier identified just 15 such stones, including UK’s Portland stone and Italy’s Carrara marble.

A decision on Makrana marble was taken after the Indian team worked on a paper, Makrana Marble: A Popular Heritage Stone Resource From NW India under the IUGS-United Nations Educational, Scientific and Cultural Organisation’s (UNESCO) Heritage Stone Designation Project.

Makrana marble is the first stone resource from India and Asia to get the GHSR status, confirms Gurmeet Kaur, assistant professor at PU.

Iconic sites where it has been used include Humayun’s Tomb in New Delhi, Akbar’s Tomb in Sikandra, Agra; Dukhnivaran Sahib Gurdwara, Ludhiana; Sheikh Zayed Mosque in Abu Dhabi and Moti Masjid in Lahore.

IUGS promotes and encourages the study of geological problems, especially those of world-wide significance, and supports and facilitates international and interdisciplinary cooperation in the earth sciences.

The main goal of the IUGS-HSS project is to recognise stones that have been used for many years, preferably over centuries, in the construction of the architectonic heritage with the IUGS geological standard of Global Heritage Stone Resource, says Gurmeet Kaur, also vice-chair representing south Asia (IUGS Subcommission on Heritage Stones).

In a reply to an email, the secretary general of heritage stone subcommission Dolores Pereira says the GHSR status means that some quarries of these heritage stones need to be conserved.

With the wide-scale mining of these stones because of their usage in heritage buildings, preserves are threatened, says Kaur, calling for the practice to be stopped.