Dr. Peter G. Tzeferis at Stonenews.eu about the new law for mining and quarrying activities in Greece

The new law 4512/2018 (Part Β: Research and Exploitation of Quarry Minerals and other provisions, articles 43-72) governing mining activity, was adopted in early 2018 and is being implemented by issuing the planned regulatory acts on various sub-issues. At the same time, after more than 40 years of implementing the multidisciplinary pre-existing system, it takes time to adapt and integrate into the new law (L. 4512/2018) which replaces the previous ones (L. 669/1977, 1428/1984, 2115/1993, 2702/1999, 2837/2000  etc) shaping a single provision. This law, in combination with L.4442/2016 (as amended and entered into force) to simplify the licencing procedure, give new impetus to the sector and require strong reflexes from management.

It is noted that L.4442/2016 (A 230) shifts the administrative burden to ex-post control and uses modern administrative tools such as notification and information technology(Notify Business Information System). Since February 2018, 4 decisions have already been adopted to simplify licensing.

In addition, regulatory decisions have been issued for the lease of public quarries, for letters of guarantee regarding the fulfillment of environmental obligations as well as the interpretative instructions on the implementation of L.4512/2018, while the decisions for the fees and the return of the rents and fees are expected, which have already been forwarded to the co-responsible ministries for (co) signing.

The online platform of Notify Business (https://notifybusiness.gov.gr) is in the final phase of integration and covers all cases where “license” or “approval” has been replaced by “Job Notification”:

The citizen submits the notification to the above system, which receives a unique number and is not required to be accompanied by supporting documents which are kept in a dossier at the site of the activity and are available for demonstration to the competent authorities. Failure to disclose prior to the commencement or modification of data or the production of false information upon disclosure shall result in administrative sanctions.

Finally, the regulations on the leases of municipal quarries, as well as those concerning the activity sheets of the mining companies and, in general, the information system for the submission of these vouchers are under construction.

You understand that the content and the new (digital in each case) format that the inactivity-activity sheets should have should be such as to include environmental and social data and enable the mining observatory already promoted by the Ministry of Environment and Energy (new Ministry organization, PD 132/2017, article 48). The new decision has already been drafted and is already in consultation with the agencies and stakeholders. Along with the decision, we have designed the information system that will implement the digital submission of the new revised vouchers. We believe that this is a very important digital tool – when it will be completed and implemented – it will be able to, in addition to gathering data on “material-energy-money” flows in the whole of the extractive industry and strategic decisions, allow the gradual introduction of valuable environmental and sustainability indicators for the industry.

In conclusion, let me say that the new law, but also the coincidental decisions and actions, are not a panacea or an end in itself. They are a tool to exploit its dynamics and limit its weaknesses to the benefit of the citizen and entrepreneurship. At this last point we have to contribute to all those involved.

What is your opinion on the marble secto? Has the licensing system been improved after Law 4512? And will the marbles finally be included in the development law, as has been repeatedly requested by the Association of Marble Companies of Macedonia of Thrace?

Generally, I would say for the marble sector that the numbers speak for themselves. If the mining sector as a whole is extroverted and at a rate of growth that exceeds the average rate of the national economy, what about the marble sector? The Greek marble industry, demonstrating operational readiness and quick reflexes, adopted a purely extrovert strategy that, over the course of a decade and despite intense competition, has made it one of the world’s largest export forces. Indeed, over the last ten years, achieving annual growth rates of over 10%, the sector tripled its exports, while increasing its destinations and maintaining prices too high. A typical example is the 2017 year that, according to the data collected, exports reached 400 million (to a total of 1 billion for the entire mining sector) making Greece the third largest powerhouse in the world for raw marble exports! With these achievements, the marble sector is a hope in the financial crisis.

In terms of licensing, let us say firstly what has to do with our own competence, ie the evaluation / approval of technical studies. The approval of technical studies for marble quarries shall be promptly and promptly forwarded by the competent Ministry of Environment and Energy department, as far as possible, if the pre-requisite Environmental Terms Approval Decision has been issued. In particular, studies of underground marble quarries either in Volakas Drama or other locations of the Region of Macedonia-Thrace, including Thassos, are also progressing normally but also meticulously, precisely because of the important issues raised in terms of design as well as the safety of such holdings. You know, underground exploitation is a pioneer for our place and the marble sector and it can be applied both to increase the profitability of the marble deposit and for environmental reasons. It may also offer high safety performance, but the tectonic behavior of the marble rock should be examined thoroughly and measures should be taken by continuous monitoring of critical sizes with monitoring instruments.

More generally, with the new law there is no longer the regime of uncertainty for the total time of quarry licensing, which now, in each case, can be extended up to 70 years and even the lease contract for public quarries can be used as operating license. Several issues are rationalized and put on a single basis, such as rents, fees, guarantees, fines that are largely parameterized to avoid confusion. Finally, in addition to concentrating a number of fragmentary provisions into a single piece of law, provisions have been abolished that for years have thwarted the sector by favoring delinquency.

It is also important that research on marble is now fully integrated with the environmental licensing scheme and, in no case, with Environmental Terms Approval Decision, which simplifies the procedure. There is also disclosure about private or privately owned quarries that confines – under certain conditions – bureaucracy. For example, all plant processing of quarry products can now work with a simple notification to notify business, which eliminates the installation and operating license.

Let me also point out that the full transfer is now possible, and only a contribution to the quarrying right has been allowed so far. Regarding the rents, the maximum legal right of 8% on the sale price of volumes and 50-50 for the rental of public quarries to public-owned municipalities is maintained, while no additional fees for marble quarries have been introduced, except for the specific case of Article 62 (Green Fund) for quarries over 40 years of age, which, moreover, existed. The category of marble quarries is the only category of quarries that continues not to incur special fees. Nevertheless, their contribution to the state’s direct income from rents exceeded € 7.5 million (20%), while the corresponding rents from the public quarries of aggregates for the same year have not exceeded € 4.5 million and public mines / energy minerals that have traditionally made a greater contribution, remained at the same annual levels of € 5-5.5 million (excluding fees). It goes without saying that the big benefits are not from rents, but from the increase in employment and the contribution to the national economy and development, especially the regional one.

However, in order to fully answer your question on the license, let me say that modernizing and simplifying licensing legislation is a dynamic process that we should be constantly monitoring, especially when it comes to such a pervasive and difficult sector. The L.4512 is in the right direction; however, there are still issues that arise mainly from environmental and forestry legislation, which add up to the total time for licensing.

However, there are Regions of the country where the bureaucracy has been significantly reduced, without detracting from the merits of the principle of legality and, above all, without jeopardizing the environmental commodity that is not negotiable. In my view, they do not require all institutional changes and all the issues are not solved with “amendments” that are demanded by the people involved. Firstly, the application of good administrative practices that restrict bureaucracy and increase the efficiency of administrative resources should be exhausted. The choice of institutional change is the final stage when something can not be corrected differently.

Finally, with regard to the question of incorporation into the development law, which is a request of the marble mining companies and the Association, the Ministry is working on a proposal to integrate this important development sector with eligible actions of investment projects concerning either the extra mining process or the process of primary products, which will aim to reduce the environmental footprint and contribute to innovation, the cyclical economy and sustainable development. In addition, the main objectives of the Development Law 4399/2016 as it stands are to support research and development applications covering the entire value chain of the cyclical economy (eg new materials, green minerals, saving of resources, beneficial management of by-products and waste etc ) and ultimately to increase the contribution of the sector to the development of the site. 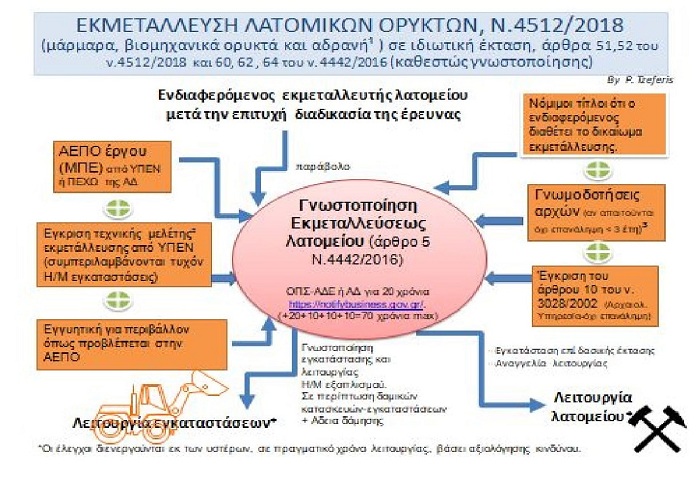 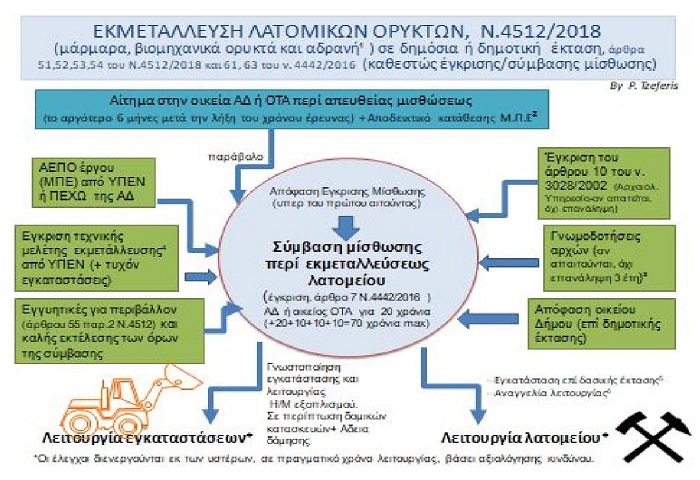 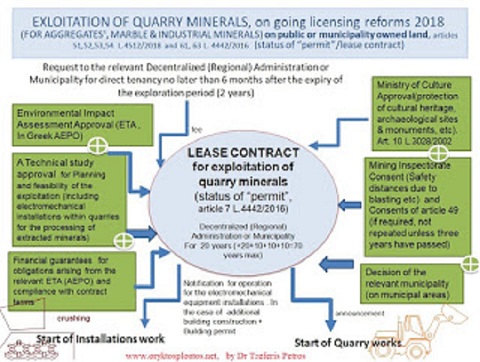