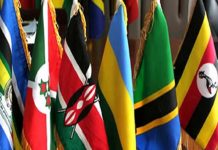 Burundi, Kenya, Rwanda, the United Republic of Tanzania and Uganda agreed on 13 December to make trade between them and with other countries cheaper, faster and more straightforward in a significant boost for economic integration in East Africa and continental trade facilitation.

Meeting in Nairobi, Kenya, representatives of the nations – who are members of the East African Community (EAC) customs union and common market – said they would implement trade facilitation reforms including reducing “non-tariff barriers” such as burdensome and incompatible product regulations.

“I feel so proud because this is an opportunity for the EAC countries, many of which are landlocked, to sell their products within the region, in Africa, and across the whole world,” said Frederick Ngobi Gume, Uganda’s Minister for Cooperatives, whose country is currently chair of the EAC.

“It also gives us an opportunity to simplify the import and export of commodities. Such an approach reduces bureaucracy, with online clearances reducing contacts at the border. This initiative will go a long way to stimulate trade within the EAC and further afield.”

“The EAC is a driving force in Africa, displaying good practice in the implementation of trade facilitation reforms,” Dr. Kituyi said. “The EAC Secretariat has shown strong leadership, and I am confident this will continue for smooth implementation at both national, regional and, eventually, continental levels.”

Frank Martsaert, chief executive officer of TradeMark East Africa (TMEA) which provided support to the ministerial meeting, said that since 2010 “we have had a strong partnership with the EAC Secretariat and partner states to increase trade and deepen the regional integration agenda through investment in hard and soft trade infrastructure. Together with UNCTAD, we look forward to continued partnership and support to the region’s trade facilitation agenda as highlighted in the Ministerial Declaration”.

The EAC move comes after most African countries signed the African Continental Free Trade Agreement (AfCTFA) in March 2018. The AfCFTA envisages establishing an Africa free trade area by building on regional blocs such as the EAC where trading nations already work together. The EAC declaration also aligns with the World Trade Organization’s Trade Facilitation Agreement, which entered into force in February 2017.

Intra-EAC trade, while low compared to regions outside Africa, is the highest among regional economic communities in Africa at 19.35% of exports.

“UNCTAD has supported the institutional architecture of trade facilitation in the East Africa region for many years,” Dr. Kituyi said. “For example, we have helped launch trade portals, which simplify trade procedures and reduce the time and cost of trade transactions in Kenya, Rwanda and Uganda – and soon in Tanzania.”

The Nairobi meeting is thought to be the first time a regional bloc in Africa has gathered at this level to pledge to undertake trade facilitation reforms in light of the AfCFTA and the WTO’s Trade Facilitation Agreement.

UNCTAD and the EAC Secretariat organized the meeting with the support of TMEA and the International Trade Centre.

Meanwhile, UNCTAD and TMEA, a non-profit organization established to support the growth of regional and international trade in East Africa, also renewed their cooperation agreement for 2019–2021.

They decided to continue to work on trade facilitation, trade portals, enquiry points, trade and gender issues, and to explore working in other fields such as transport.