China built more skyscrapers in 2018 than ever before 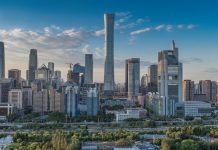 China built more skyscrapers in 2018 than anywhere else in the world — or at any other time in history, according to data released by the Council of Tall Buildings and Urban Habitat (CTBUH) on Wednesday (2018/12/12).

A total of 88 buildings measuring 200 meters (656 feet) or above were completed in cities across China this year. The figure sets a new benchmark for annual skyscraper construction in a single country, and is almost seven times higher than the 13 completions recorded in the US, which ranked a distant second.

The rate of skyscraper development around the world has surged over the last decade. Globally, the number of new 200-meter-plus buildings fell slightly to 143 this year (four fewer than 2017’s all-time record of 147), but it is still the second-highest figure in history, according to CTBUH’s annual report.

Much of this growth has been driven by China. The country accounted for 61.5% of new buildings recorded in the CTBUH’s 2018 figures. Of those, 14 were built in the southern city of Shenzhen, which topped the city rankings for the third consecutive year ahead of Dubai, Beijing, New York and the northern Chinese city of Shenyang.

Known as China Zun — a reference to a type of ceremonial wine vessel that it resembles — the 1,731-foot (528-meter) structure is now the eighth tallest building in the world.

Asian cities dominated the rest of the list of the year’s tallest completions, with Ho Chi Minh City, Vietnam, and Changsha, China, also finishing structures taller than 400 meters (1312 feet) in the last 12 months.

The Comcast Technology Center in Philadelphia is, at 342 meters (1,121 feet), the tallest building to be completed outside of Asia this year, and the tallest in the city.

The CTBUH estimates that the world could see anywhere from 120 to 150 new skyscrapers measuring 200 meters or above completed in 2019. But its annual report also acknowledges that China’s race to build upwards may soon be hampered by domestic economic conditions.

“Although 2018 was a banner year for skyscraper projects in the country, it is likely that coming years will register the effects of increased financial controls and more conservative debt financing policies,” the report said. “If these policies continue, China’s seemingly limitless dominance of the tall building world may begin to falter.

“It can also be expected that any tariffs imposed against China would lead to disruptions in the global construction industry, particularly concerning steel, as well as in China itself.”

A slowdown would not only affect construction within the country, but also overseas developments that rely on private or state funding from China, the report said.

“The ability of Chinese banks and developers to fund overseas projects could be further reduced,” the report said. “Overseas investment has already been strongly curtailed during 2018, resulting in the cessation, sale, or interruption of Chinese investor-driven projects in Australia, the United States, and elsewhere.”

The post China built more skyscrapers in 2018 than ever before appeared first on StoneNews.eu.