The countries with the largest marble exports in 2017 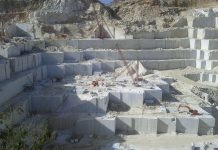 Which countries exported more marble in 2017? What was the ratio between marble blocks/slabs and finished marble products?

Stonenews.eu, after studying the statistical results of the International Trade Centre, the UN Comtrade and the National Statistical Institutes, is presenting the five countries with the highest value on marble exports as well as the corresponding quantity and the ratio between marble blocks/slabs and finished marble products.

In 2017, Turkey, China, Italy, Greece and Spain exported almost 78% of the global value and quantity of marble exports (marble blocks and finished marble products in total).

Turkey increased exports to China, India and the U.S.A. and consequently exceeded the $ 2 billion in export value, becoming by far the largest marble exporter in the world. However, it should be noted that by decreasing the price per tonne for one more year, Turkey is the country that exports at the lowest price compared to the other four.

Italy, after two declining years, returned to the upward course in 2017, increasing the value of marble exports by +7.91%, compared to 2016, mainly due to the rise in marble blocks exports to China and India.

Greece has systematically increased the value and quantity of marble exports over the last few years while maintaining the price per tonne at high levels. The increase in exports is mainly due to the rise of marble blocks and slabs exports to China, while exports of finished marble are also on the rise.

Spain has seen a sharp decline in marble exports over the past five years. Typically, between 2013 and 2017, the fall in export value was 42%. The price per tonne of marble blocks exports is declining opposite to the one of the finished marble products, which remains at high levels.

In conclusion, the 34.69% of the total amount of finished marble exports corresponds to the 61.96% of the value, which shows the added value of the finished products.

2515: Marble, travertine, ecaussine and other calcareous monumental or building stone of an apparent specific gravity of >= 2,5, and alabaster, whether or not roughly trimmed or merely cut, by sawing or otherwise, into blocks or slabs of a square or rectangular shape (excluding in the form of granules, chippings or powder)

680221: Marble, travertine and alabaster articles thereof, simply cut or sawn, with a flat or even surface (excluding with a completely or partly planed, sand-dressed, coarsely or finely ground or polished surface, tiles, cubes and similar articles of subheading 6802,10, setts, curbstones and flagstones)

The post The countries with the largest marble exports in 2017 appeared first on StoneNews.eu.