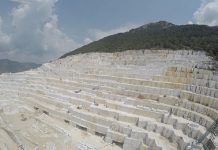 FHL Kyriakidis marble company is in fifth best position in the country’s list of the most profitable productive companies, just after companies such as Hellenic Petroleum, Motor Oil and the tobacco companies Papastratos and Karelias. The classification is based on the last published use (2017), while the course of operations is also the same in 2018. In particular, the parent company FHL Kyriakidis Marbles & Granites and the group achieved sales of €112,80 million and €113,65 million respectively.

It is worth mentioning that the company / group has developed strong exporting operation. The sales trend so far shows that the markets of China, the Middle East, the former Soviet Union, Singapore, South Korea and Indonesia continue to be significant customers of the group and have not been significantly affected by the economic crisis but show dynamic growth rates. The presence of the company in the region of China, where the demand for Volakas marble is particularly high, is carried out through its distributors and regular visits of its vendors as well as participation in the various exhibitions.

The post A marble industry among the five most profitable companies of Greece in 2017 appeared first on StoneNews.eu.