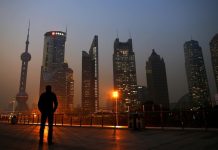 China’s economic growth cooled slightly in the fourth quarter from a year earlier as expected, weighed down by weak investment and faltering consumer confidence as Washington piled on trade pressure, leaving 2018 growth the weakest in 28 years.

“We expect an escalation of stimulus in infrastructure and property in the second half.”

“I believe they want to see an aggressive target (above 6.5 percent) as they celebrate the 70th anniversary (of the establishment of the PRC)”

“China can’t rely on exports or a very difficult manufacturing sector, but we see an upside in infrastructure. The government will approve a lot more projects in the pipeline. 2019 will be more of a domestic story, especially on the investment side.” 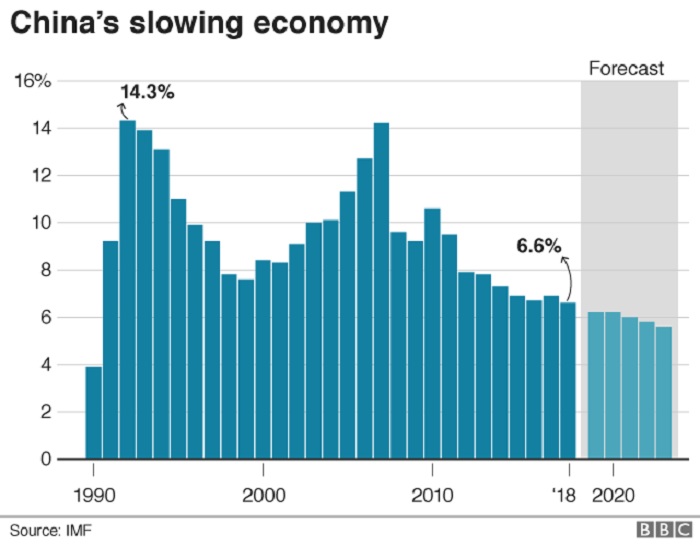 “The latest data suggest that economic growth remained weak at the end of 2018 but held up better than many feared, in part thanks to a policy-driven recovery in infrastructure spending. Still, with the headwinds from cooling global growth and the lagged impact of slower credit growth set to intensify in the coming months, China’s economy is likely to weaken further before growth stabilizes in the second half of the year on the back of expanded policy stimulus.

“There was no surprise from the GDP data but the basic message is that the Chinese economy is still slowing down.

“The renminbi appears to have stabilized. It shows that the investors do not seem to have a big concern in the near-term outlook of the Chinese economy (and are) probably expecting some positive impact from policy measures.

“Today’s retail sales are slightly higher than expected. We hope the uptrend should be sustained, but we don’t know what will happen to consumer sentiment in China. It probably depends on the result of the U.S.-China negotiation on trade. We hope the negotiation should end up with some more positive impact on sentiment.

“Today’s industrial production is a slightly positive number but the manufacturing sector still appears to have a downside risk in the first quarter.

“The Chinese government’s announcement…that is, to focus on stimulating the economy, appears to be focusing on the tax cut to stimulate the consumption.

“It takes time (to take effect) compared to previous measures that were taken in the form of the increase in more direct spending on infrastructure.

“We still think the Chinese economy could bottom out in the middle of the year.”

“China’s GDP headline was within expectation. But its industrial production was unexpectedly firm, which was probably due to infrastructure investments.

“The Chinese economy lacks momentum. Impact from U.S.-China trade tensions are appearing and its adverse impact will continue. In addition to that, uncertainties over the global economy are increasing.

“The focus will be how China’s domestic demand will offset worsening external demand. It will be a close watch how the government’s measures, such as subsidies and infrastructure investment, will support domestic demand.”

“The GDP data was on expected lines…main drag was from the external side.

“We expect further stimulus from the fiscal side in 2019…focus would continue to remain on reducing the tax burden and easing conditions for SMEs.

“One positive factor in terms of the outlook for the yuan and the equities market looking at 2019 is that the Chinese government is now taking a lot of stimulus measures to support growth. The reserve requirement ratio cuts have already been implemented and more will follow, and a ramping up of public expenditure on infrastructure and the impact of tax cuts will also help the economy.

“We do expect growth to be relatively strong this year at around 6.3 percent. That should support stability of the yuan and also help to underpin the stock market. The big risk to all of that is what will happen with the U.S.-China trade war. If there is no deal and if the trade measures escalate, then this would be a negative for the currency, the growth outlook and the equity market. A lot will hinge on what happens in the U.S.-China trade war, and if a deal can be concluded in the first half of this year.”

“The data shows the economy is steadily slowing down, although we had thought we could have seen a bigger slowdown.

“It is hit by three factors, a slowdown in the global economy, including Chine’s own, due to rising U.S. interest rates, the U.S-China trade war and weak demand for mobile phones, which accounts for about 70 percent of the fall in China’s exports in December.”

“The government has means to support the economy. They can expand infrastructure spending and they can cut banks’ reserve requirement ratio. So we don’t need to worry about capital spending.

“But the problem lies in consumption. As the U.S. and China clash on many fronts, consumer sentiment appears to have been hurt. Until now, solid wage growth has been supporting consumption but now there appears to be a sense of vague anxiety about the future.”

“It’s pretty clear that the government will try to use as much selective stimulus to keep the economy on a good track. They could easily reduce the RRR again. It is still not down to where it was back during the financial crisis. That, plus some tax cuts. The difficulty will be trying to ramp up consumer spending and that’s because of the high debt load consumers are in right now. The corporate debt load is high as well. Local governments are strapped with debt. So it’s not the question of if government being able to provide for the stimulus but really the effectiveness of it.”

“The data continues to reflect a slowdown in China that is caused by both domestic and external weakness. Some positives to take away are that IP and retail sales beat expectations in December. That highlights some degree of resilience in the economy and shows that some of the targeted stimulus measures are helping a little to support the economy.

“The trade war didn’t directly impact on the growth figures so much because growth is mostly domestically supported. But its impact on both consumer and investor confidence was much greater.”

“No real surprises there. The GDP number is down a little bit but that has been expected. It’s consistent with the commentary around a slowdown in Chinese growth.

“The IP and retail data point to some stabilization in growth towards the end of last year. Overall they are not bad numbers although there will be some debate about how reliable these numbers are.

“We are expecting a slowdown in Q1 led by exports, although for the year as a whole we are seeing 6.2 percent.

“As far as policy response is concerned, I don’t think we are likely to see the kind of stimulus we saw in 2015/16.”

“The headline on its own is not much of a surprise for markets. If you look at some of the positive spin for this data – the December IP and retail sales – came in better than expected. If we look at the breakdown of the commodity output, they seem to have grown at or above average levels for December. That may help remove or reduce some of the concerns of a growth slowdown becoming more entrenched this year.

“The unemployment number in the data has edged up and we should not ignore that. That number edging up is not good.

“There will be more stimulus, they have already announced some of the plans which are in approval stage and will be carried out over the course of the year. It’s still not time to relax on that front and we will see more effort on stimulus this year.”