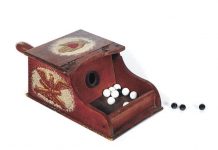 You’d be given black and white marbles. To vote no, a black marble was dropped in the box.

As early as the 17th century in America, members of fraternal clubs often voted at their meetings without paper ballots.

Many decisions had to be almost unanimous; just one “no” vote could defeat a project. So, they used a blackball box instead of paper ballots. Each person was given a random number of black and white marbles. To vote no, a black marble was dropped in the box.

The box had a board that covered the voter’s hand and marble so that no one could see the vote. Each marble made a noise when it was dropped, so only one marble could be used. When the box was opened, it was easy for everyone to see the number of black marbles and if the project, motion or request for membership had passed or failed. It was impossible to tell who had used a black marble.

The term “blackballed” is still in use, and the box was saved as part of history. The rules are still in “Robert’s Rules of Order,” a guide to parliamentary procedure, but there are few times when only one vote, not a majority, is needed to make a decision.