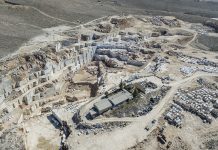 Turkey’s marble exports have stood out in recent years in the Chinese market. With its history of more than 3,000 years in marble manufacturing, Afyonkarahisar’s İscehisar district accounts for a significant portion of Turkey’s exports in this area. The world famous “Afyon marble” produced in the district, which hosts some 500 marble manufacturing enterprises, is exported to 120 countries including China, India, the U.S., Iraq, France, the United Arab Emirates (UAE) and Saudi Arabia. Businessmen and trade delegations from China place orders in one-on-one meetings with marble manufacturers in İscehisar. The marble exports from İscehisar to China in the first five months of the year amounted to $17.89 million, up from $15.83 million in the same period last year, marking a 13 percent rise.

İscehisar Marble Manufacturers Association Chairman Muharrem Çakmak told Anadolu Agency (AA), “When we say marble in Turkey, the first place that comes to mind is İscehisar. Today, when we speak of İscehisar, everyone thinks of resolute, enthusiastic and hardworking people who earn their living from the marble industry.”, emphasizing that the marble sector is the most important means of earning a living in the district,as there are some big and small 500 marble enterprises and workshops in the district that provide great added value to the national economy.

Wang Bin, a Chinese businessman, said they come to Turkey every month to buy marble, noting that they have been importing marble from the country for nearly a decade. “I buy marble from Turkey all the time. Afyon marble has become popular in China in recent years. Since gray stones in particular are popular in our country, we prefer Afyon marble. Not only me, but also many Chinese businessmen come here and negotiate to buy marble,” he said.

Remarking that the Afyon marble is mostly used in construction, Wang said as China is a crowded and constantly developing country in terms of population, they use marble extensively. He further stated that they value marble very well, adding that it is no longer a luxury but an item of daily life for them. “We use Turkish marble everywhere in China. It is used for exterior cladding on buildings and indoors, as well as in bathrooms, kitchens, shopping malls, many luxury houses and artists’ houses. China will continue to buy marble from Turkey,” he said.

Yalçın Özsarı, a marble manufacturing company manager, noted that they cut marble and extract it in blocks in the İscehisar marble quarry and sell it to domestic and overseas markets. Expressing that they have been engaged in this business for around six years, Özsarı said: “When we started, our exports to China were very low. We were shipping two containers of marble a month. However, our exports to this country have increased for the last four years. We have six customers from China. We regularly produce for these companies.”