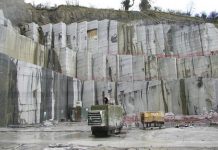 Recently, a working session on mining potentials of Pakistan was held with the participation of both the state and the company dedicated to stone development in the country. It is true that Pakistan has good marble and granite deposits that are not fully exploited, out of which marble is the one that is mainly exported.

Stonenews.eu, after studying the statistical results* of the International Trade Centre, the UN Comtrade and the National Statistical Institutes, is presenting Pakistan’s marble exports in 2018 in the main HS Codes as well as their growth from 2017.

The main destination country of Pakistan’s marble exports is China, absorbing 81% of their raw marble blocks and slabs.

Pakistan’s raw marble exports have been showing a really impressive upgoing trend from 2003 till 2013, as the value grew up by 1387%, corresponding to an increase of 3093% in quantity of exports. 2013 ended with a record high in raw marble blocks and slabs exports, to be followed by a continuous decrease until 2018. More specifically, between 2013 and 2018 the value of exports was decreased by -58.42% and the quantity by – 50.83%.

The post Pakistan’s marble exports in 2018 appeared first on StoneNews.eu.