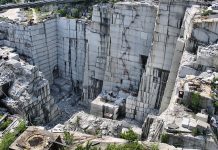 Brazil closed 2018 among the largest countries in the production and export of natural stones and their products and maintained a prominent global position.

The strength of the Brazilian natural stone sector continues to be high in the international market. Data from the Brazilian Association of Ornamental Rocks (Abirochas) indicate that Brazil occupies the 4th position among the countries that produced the most natural stones, accounting for 7% of the world’s production of the natural stones sector. United States, China and Italy, respectively, maintained the leadership.

Stonenews.eu, after studying the statistical results* of the International Trade Centre, the UN Comtrade and the National Statistical Institutes, is presenting Brazil’s exports of finished natural stone products (value and quantity of exports) in 2018 based on the main HS Codes and their changes between 2017 and 2018. As presented at the table above, in 2018, the highest value of exports as well as the largest amount of exported products, were both was achieved on HS Code 680293, which amounted $ 468.16 million in value.

The US remain the traditional destination of exports of Brazilian natural stone products, absorbing about 80% of the total value of exports.