What you should know about Africa’s massive, 54-country trade bloc 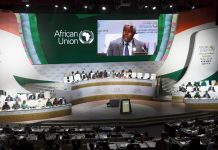 Leaders from 54 African nations met on Sunday to make a critical expansion to their continental free trade zone. If the massive deal works as hoped, it will connect 1.3 billion people, create a $3.4 trillion economic bloc, and heat up commerce within the continent itself.

The African Continental Free Trade Area, which went into force in May, finally signed Africa’s largest economy on Sunday. Nigeria President Muhammadu Buhari agreed to the landmark deal at the African Union summit in Niger after four years of negotiations.

“The eyes of the world are turned towards Africa,” said the current chairman of the union, Egyptian President Abdel Fattah al-Sisi, according to Reuters.

“The success of the AfCFTA will be the real test to achieve the economic growth that will turn our people’s dream of welfare and quality of life into a reality,” he added.

In terms of the number of countries participating, the AfCFTA is envisioned as the world’s largest free trade zone since the establishment of the World Trade Organization, in 1994. The trade deal will start by cutting tariffs for goods traded within the bloc and then eventually expand into other areas.

“This agreement underlines how Africa is moving in a different direction than other regions in the world,” Judd Devermont told CNBC. Devermont is director of the Africa Program at CSIS, a policy research organization. “The continent’s leaders are embracing integration, while some global counterparts have turned away from multilateralism.”

Filling a void: Trade within Africa itself

“On a pan-African scale, the economic impact of AfCFTA will be significant … removing tariffs on intra-African trade will boost net income at the continental level by US$2.8 billion per annum,” Chris Devonshire-Ellis, founder of Dezan Shira & Associates, a legal and operational advisory firm, wrote in May.

Intra-African exports made up only 19% of total trade in 2018, compared to 59% and 69% for intra-Asia and intra-Europe trade respectively, according to Brookings Institution’s January numbers.

The IMF described the free-trade zone as a potential “economic game changer” in a May report. It said the trade deal could boost global growth but just “reducing tariffs alone is not sufficient” to achieve that goal.

Devonshire-Ellis said that “implementation of the WTO’s Trade Facilitation Agreement would boost benefits even further, with an estimated aggregate real income gain of 3.5 percent, or some US$100 billion.”

Ultimately, the trade agreement will push for stronger economic collaboration between neighboring countries. The hope is that more trade will help bring about better transportation infrastructure.

Devermont said “African and international investors almost certainly will benefit from the AfCFTA. It will become easier to expand operations across countries and regions.”

Improved trade links will help the people of Africa overall, but some countries will benefit from the agreement more than others.

“Developed economies, such as South Africa’s, are poised to profit from the agreement,” he said. Devermont suggests that South Africa will be able to further propel its private sector to regions outside of southern Africa.

“Countries that have positioned themselves as connectors, including Rwanda and Ethiopia, should be able to leverage their air links, ports, and dry docks, as well as infrastructure, to crowd in more investment,” he told CNBC.

China has played a major role as the “broker” in the African trade deal, said Devonshire-Ellis.

China has signed bilateral trade agreements with more than 40 countries in the African continent. In 2000, trade between China and Africa amounted to $10 billion. At its peak in 2014, that commerce climbed to $220 billion before declining to $148 billion in 2017, according to the China-Africa Research Initiative at Johns Hopkins University.

China used “its diplomatic, political, and trade clout to harness an agreement” between the African countries, wrote Devonshire-Ellis.

While Southeast Asian countries have gained manufacturing that has departed from China, those nations will soon become too expensive as well, he said.

“The future writing is on the horizon: low-cost manufacturing over the next decade will start heading to Africa, and China still needs to buy cheap and reliably produced goods,” Devonshire-Ellis wrote.

“The ratification of the AfCFTA presents a real milestone for African unity,” wrote in a report by The Africa Growth Initiative at Brookings Institution in May. “Whether it will go beyond symbolism, however, depends in part on the depth and scope of the provisions and commitments currently being negotiated.”

AfCTA will boost the continent’s manufacturing capacity and usher in more regional trade. But ultimately, difficulties may lie in the “the vast economic disparity that exists among African countries,” the report wrote.

According to the International Monetary Fund, eliminating tariffs could boost trade in the region by 15-25% in the medium term, but that could double if other, non-tariff barriers are reduced. Those include poor road and rail links, large areas of civil unrest, border bureaucracy, and corruption that have held back growth and integration.

“The most vexing problem will be implementation,” said Devermont. “Even in the most integrated African regions, there are enduring challenges with member-states failing to adhere to the free movement of people and trade protocols.”

Devermont said for one, Africa’s largest economy Nigeria “may struggle to avail themselves of the agreement’s opportunities.”

Separately, “small, landlocked countries that have failed to invest in road and rails network could miss out,” he said. The establishment of the free trade zone could hurt local industries that “have only survived because of government protectionism.”

— Reuters contributed to this report.

The post What you should know about Africa’s massive, 54-country trade bloc appeared first on StoneNews.eu.