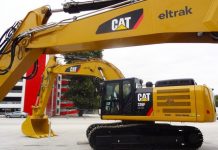 ELTRAK S.A. announced the finalization of the transfer procedure of 66.03% of the company’s shares to ELTRAK CP LTD, a subsidiary of English CP Holdings LTD. This percentage of the share capital of the company was held by:

In fact, the company’s new Board of Directors was formed on 22 July consisting of:

Mr. Athanasios Tsotsoros was also appointed Chairman of the Company’s Audit Committee until the next Shareholders’ General Meeting.

CP HOLDINGS LTD is a private family business with principles that fit perfectly with those that ELTRAK has adopted in its current course. Headquartered in Watford, England, CP Holdings has investments in the United Kingdom, Europe, the Middle East and Africa as well as the Caterpillar Dealership in the Israeli and Hungarian markets.

For its part, ELTRAK S.A. asserts that neither a change of activity or management level is expected in the short or medium term.

The post 66.03% of ELTRAK S.A. in the hands of English CP Holdings LTD appeared first on StoneNews.eu.