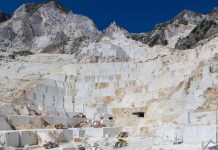 Stonenews.eu, after studying the statistical results* of the International Trade Centre, the UN Comtrade and the National Statistical Institutes, is presenting the trend of finished marble exports in the top 5 exporting countries from 2009 to 2018.

Things are different when it comes for the quantity of finished marble exports. Turkey get on the top, leaving China second, while Egypt’s route had a large deviation upwards.

As for unit value, Italy is once again the winner of the game as the country that exports finished marble steadily in the highest price per tonne during the decade.