Afghanistan: The Ministry of Mines and Petroleum inks 9 marble extraction agreements worth $23m 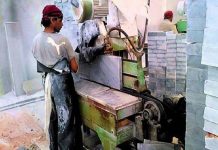 The Ministry of Mines and Petroleum (MoMP) on Monday inked nine multimillion dollars’ worthagreements of marble mining in western Herat province, incorporating amendments at the request of contractors.

‘These amendments have been brought in line with international standards in order to avoid legal issues in the future,’ said Nargis Nihan, the Acting Minister of MoMP during the contract-signing ceremony here.

‘These nine contracts encompass 147 small and medium mining projects, in which work on some of them had stopped due to legal and technical issues and the contractors had demanded amendments two years ago.’

According to her, the contractors of those projects couldn’t carry on their work according to the initial agreements due to legal issues, and thus the amendments were incorporated in the
agreements.

The contracted Afghan companies had paused the marble extractions since the National Unity Government (NUG) came into power. The value of these projects is considered to $23 million.

‘We are striving to sign more mining and extraction contracts this year. We will soon witness more achievements in terms of mines and soon we will sign another five contracts of marble and talcum mines,’ said NargisNihan.

Meanwhile, the officials in the Marble Extraction and Process Council in the western region said that they had invested dozens of million dollars in marble extraction and processing.

They added that they had been facing many challenges due to lack of raw materials over the last five years but their problems would be resolved as the amended contracts were signed.

‘The new contracts are very important to us. We can broaden our activities through the extraction of marble mines. We are grateful to the government,’ said Wahidullah, a member of the Marble Extraction and Process Council.

‘The government should help us in terms of extraction,so we do not lose our foreign customers,’ said Ghulam Mohammad Eisa, another member of the Marble Extraction and Process Council.

This comes as the economic experts believe that the government should encourage and help the private sector in the sphere of extraction and processing of mines in order to help stimulate the Afghan economy.

The post Afghanistan: The Ministry of Mines and Petroleum inks 9 marble extraction agreements worth $23m appeared first on StoneNews.eu.