Cave of the Nymphs: This is where the famous marble of Paros came from in ancient times 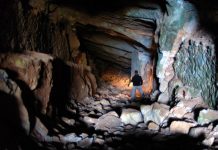 The Cave of the Nymphs is found at the Ancient Quarries in Marathi (4th km, Parikia-Lefkes road).

The quarries date back to antiquity and marble mining continued without interruption until 1881, bringing wealth, glory and prosperity to the island. Today, the extraction of Parian marble continues at the quarries and other locations on Paros.

The renowned marble of Paros was one of the most sought after materials used in ancient sculptures and Greek architecture. The gallery is 190 meters long and extends deep below the surface of the earth. Of the three entrances to the quarry, the one to the south is of great interest: the Cave of the Nymphs.

The Parian earth is endowed with this precious “body” – white, clean and fine-grained, with a crystalline texture. The most transparent marble in the world. The first Cycladic idols were made of the “paria stone” or “lychnitis” (a name that may come from the clarity of the marble or the oil lamps used to light the galleries). Paros evolved into an important artistic center, with famous sculptors including Agorakritos and Skopas the Parian.

As you descend into the galleries, consider the blood, sweat and tears of the thousands of people who brought the marble used to build so many important structures to the surface with only the light provided by oil lamps. The depths of the island produced Greek sculptures that would become eternal world heritage monuments: Nike of Paionios, Hermes of Praxitelis, Nike of Samothrace, the Venus de Milo and others.

Think of the large museums of the world: the Louvre, The Metropolitan Museum of New York, the British Museum in London, the New Acropolis Museum. Every single large museum on earth has at least one priceless treasure made of Parian marble on prominent display.

The ancient quarry is a monument of industrial archeology.

Descend with care into the lowest section of the main gallery, from which other small galleries branch, and be sure to bring along your flashlight.

The post Cave of the Nymphs: This is where the famous marble of Paros came from in ancient times appeared first on StoneNews.eu.