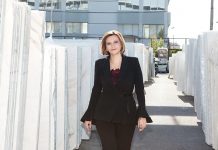 One of the largest companies in the marble sector in Greece and the only listed, with strong international presence in many parts of the world, in the midst of the country’s financial crisis, “Iktinos Hellas S.A.” managed to show significant growth by expanding its activities to new markets, to be introduced to Mid Cap with a significant shareholder turnover and to increase its turnover, holding about 20% of total Greek marble exports. Today, the company operates eight marble quarries in northern Greece, a new quarry in the Peloponnese and two cutting and processing plants in Athens, employing 450 people and exporting 95% of its production to 90 countries.

In an interview with Liberal.gr, the Vice President of “Iktinos Hellas S.A.” Julia Chaida, emphasized the importance of extroversion which has always been a primary goal of the company, resulting in the strengthening of “Iktinos” on a global scale, with a particular developed sales network, with representatives in almost all countries but mainly with its participation in international fairs.

Reducing the degree of dependence on the Chinese market and correspondingly spreading to more countries is also the company’s goal. “China is our main export destination, absorbing 50% of total exports in 2018 versus 60% in 2017. The company’s efforts aim to further reduce exports in this market, although of course it will continue to dominate export destinations”, says Mrs Chaida, who also adds:  “The countries of the Middle East, South America, the former Soviet Republics, North Africa and South Asia are in high demand for Greek marbles, which are in demand because of their colours and quality. The US market is also a target, as it is the leading destination country for Greek finished marble products.”

Some of the most iconic buildings that Iktinos has “cladded” are Wynn’s hotels in Las Vegas, Boston and Macau, the French television building, the DUBAI MALL, the municipal theater in Lima, Peru, and more.

Regarding the tourist investment in Crete, Mrs Chaida refers to the great advantage that the company holds all the necessary permits for the construction of this tourism project, which makes it particularly attractive to foreign investors. “We are currently in the process of discussing with various funds for this investment. We study all the cases, from selling the whole project to cooperating with a large foreign fund for the construction of the first residential area. There is nothing yet to be announced but we hope that by the end of the year we will have reached the end ”.

Faithful to the doctrine of “give and take”, “Iktinos Hellas S.A.” invests heavily in the Corporate Social Responsibility program. In addition to contributing to the economy of the local communities where it operates by creating new jobs and partnerships with local businesses, the company is providing financial support to organizations and associations to implement their programs. At the same time, it helps the work of voluntary organizations that support vulnerable social groups, while responding promptly and supporting emergencies. In terms of its own operation, it has installed and operates in all its production plants, biological treatment of waste water and waste resulting from its activity, with a view to their reuse, thereby reducing its environmental footprint. In addition, it has commissioned the Aristotle University of Thessaloniki to investigate the impacts on biodiversity and the environment from quarry exploitation. “We continue our efforts to protect the environment by restoring the marble quarries of the company after the completion of their mining activities, as well as other abandoned quarries through tree planting and restoration of vegetation and sowing suitable species as well as operation and maintenance of the irrigation network ”, closes Mrs Chaida.