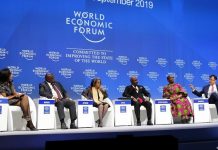 Leaders who gathered to discuss the future of Africa this year had a rallying point – something they could agree was reason to be hopeful: the ratification of the Africa Continental Free Trade Area (AfCFTA). Years of talks have finally yielded an agreement to bring down trade barriers, boost economies and unite countries which historically have had stronger links with European, American or Asian powers than their own neighbours.

“The future is great, it looks very bright for the African continent, and if there was ever a time when Africa can definitely be said to be on the rise, this is the time,” he said.

“This is Africa’s century, and we want to utilize it to good effect.”

But no one at AF19 was under any illusions about the challenges: AfCFTA may look good on paper, but how will it be implemented? And how can we ensure that Africa’s uniquely young population – the 200 million people aged between 15 and 24 – can fully benefit?

And if AfCFTA is implemented, what can stop poorer African countries being crushed by stronger neighbours? Ngaire Woods, professor of Global Economic Governance at Oxford University, said that was a real risk.

“The consequences of liberalization can really damage some of the poorest in these countries, but that’s not a reason not to do it, that’s a reason to have really great policies of support.”

All the leaders agreed there were also risks from global trade wars, and Africa still had much to do on corruption and governance. President Emmerson Mnangagwa struck a particularly realist note for his country, Zimbabwe.

The post ‘This is Africa’s century’ – what we learned at the World Economic Forum in Cape Town 2019 appeared first on StoneNews.eu.