Islamabad Chamber of Commerce and Industry: For Focusing On Development Of Marble Industry 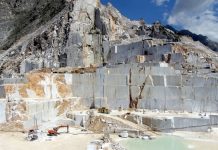 President, Islamabad Chamber of Commerce and Industry Muhammad Ahmed Waheed on Monday urged the government to focus on the betterment and development of marble industry, which has great potential to promote exports and help the economy to improve.

He said this while talking to a delegation of local marble industry that called on him led by Muhammad Shakeel Munir, former Chairman, All Pakistan Marble Industries Association. Group Chairman Saleem Mughal, Mian Abdul Sami, Naeem Mughal, Shahid ur Rehman, Sattar Khan and others were in the delegation.

Muhammad Ahmed Waheed said that all provinces of Pakistan including Baluchistan and KP have huge reserves of marble and granite.

However, lack of new technology was making marble industry to use old quarrying methods due to which the standard quarry wastage in Pakistan was up to 73 percent of the gross produce.

He stressed upon the government to cooperate with the marble industry in introducing latest technology and machinery for promoting mechanized mining in the country.

It would help in producing value added marble products and give boost to exports.

Tahir Abbasi, Senior Vice President and Saif ur Rahman Khan Vice President ICCI said that global market for marble and granite was estimated at over $62 billion, but Pakistan’s share in it was below one percent.

He urged that government to allow duty free import of marble machinery to upgrade this important industry so that it could compete more effectively in the international market.

Speaking at the occasion, Muhammad Shakeel Munir, former Chairman, All Pakistan Marble Industries Association said that China was importing raw marble and granite from Pakistan and after processing & value addition was earning huge profits through exports.

He said that quantum of marble and granite exports could be increased manifolds by establishing marble industrial parks in collaboration with China for which government should accelerate efforts.

He said that industrial parks will bring cost effective cutting, blasting and finishing technology in Pakistan that will enhance the competitive edge of the industry and improve our exports significantly.

The post Islamabad Chamber of Commerce and Industry: For Focusing On Development Of Marble Industry appeared first on StoneNews.eu.