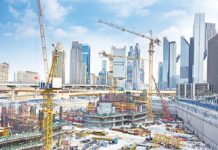 Construction activity in the Middle East and North Africa (MENA) region has been relatively sluggish and is forecast to grow at 3.3 percent in 2019.

However, after a lacklustre 2019, construction growth in the region is forecasted to steadily improve in the next four years, to reach 4.9 percent by 2022-2023, data and analytics company GlobalData said in its Global Construction Outlook report.

Saudi Arabia remains the largest regional construction market in the Middle East, despite a contraction in construction in the kingdom in recent years. Construction output is forecast to recover in 2019, growing by 2.6 percent, before posting average growth of 3.8 percent in 2020-2023, the report said.

The report pointed out that construction boom in Qatar, that began almost a decade ago, seems to have run its course as major projects are largely completed.  Construction output decreased by 1.2 percent year-on-year in Q1 2019, a sharp deceleration after years of rapid expansion.

However, one of the region’s brightest spots will be Egypt, where GlobalData predicts that construction will expand by an annual average of 11.3 percent between 2019 and 2023.

Yasmine Ghozzi, Economist at GlobalData, said: “Egypt’s economy is forecast to expand at a relatively rapid rate over the next two years, driven by sustained growth in natural gas production and a recovery in tourism. Delivering an ambitious renewable energy program is a priority for the government. Construction activity is also being driven by Cairo’s urban development program, which could involve building 23 new cities”.

The pace of growth in sub-Saharan Africa will be particularly strong, averaging 6 percent a year in 2019–2023, Global data said.

According to the report, construction activity in Nigeria will accelerate steadily, supported by government efforts to revitalise the economy by focusing on developing the country’s infrastructure.

But Ethiopia will be Africa’s star performer, with its construction industry continuing to improve in line with the country’s economic expansion, but the pace of expansion will ease back to single-digits, it said.