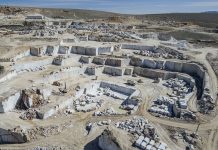 The natural stones sector must diversify export destinations due to contractions in its export markets including China, Aydin Dincer told Anadolu Agency.

The half of natural stones exports are constituted by marble, of which main destinations are China and India, he noted.

“The U.S. is the leading country for our exports of manufactured goods with $400 million, followed by Saudi Arabia,” Dincer added.

“The natural stone sector, which constitutes half of mining sector’s exports, is a significant item,” he added.