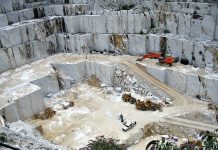 The United Kingdom imported €601.41 billion worth of goods from around the globe in 2018. That metric reflects a 4.4% uptick from 2017 to 2018. Natural stone imports, both rough and finished, represent almost 0.03.% of total UK’s import value. More specifically, in 2018, UK imported marble and granite, both in blocks and slabs as well as finished products, of €178.36 million total value, out of which €127 million refer to granite imports only, rough and finished.

Brexit-related uncertainty does not reflect much on UK’s imports of marble and granite products during the first half of 2019. The following table shows the growth rate of UK’s imports of the above natural stone categories based on the HS tariff code system and the data have been derived by Eurostat and edited by Stonenews.eu.

As seen at the table above, the upward trend of 2018 continued in most of the months of 2019 first half as for unprocessed products, meaning marble and granite blocks and slabs. More specifically, marble blocks and slabs had the greatest growth in January (73.70%) and the greatest decrease in May (-31.47%) compared to last year’s same months. Finished marble products, on the other hand, experienced an overall decline, except April that closed with a plus sign 20.13% increase from 2018 April.

Granite blocks and slabs followed a remarkable upgoing trend during the first half growth of 2019, with the exception of January and March. April closed with the significant 90.70% rise in import value, followed by February with 59.27% increase from last year. Finished granite products import value in the first half of 2019 didn’t differ much from last year’s same period of time: marginal decrease in January and March and minimum to medium increase in the rest of the months.

It worth mentioning that, during the first half of 2019, UK’s import value of marble blocks and slabs and finished marble products reached €3.33 million and €20.62 million respectively. As for granite, in the first six months of 2019, UK imported granite blocks and slabs of €38.27 million worth as well as finished granite products of €31.57 million worth.