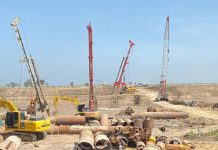 Construction of a new airport that will serve Phnom Penh is on track and could be completed as early as 2023, the developer said.

Pung Kheav Se, chairman of the Overseas Cambodia Investment Corporation (OCIC), the company behind the project, said they are now building the foundations of the airport, conducting an environmental impact assessment, and negotiating with people affected by construction.

Kheav Se was speaking to reporters on Thursday at the Cambodia International Construction Industry Expo in Phnom Penh’s Diamond Island, according to the Khmer Times.

“We are now laying the foundations and building the runway. If there are no issues with the land, I believe that the airport will be ready by 2023,” Kheav Se said.

The new airport is being built in Kandal province, south of Phnom Penh.

Sin Chansereyvutha, spokesman of the State Secretariat of Civil Aviation, said the airport is not likely to be finished so soon.

“We need time to clear the land and lay the foundations and solve any land dispute. As per our schedule, the new airport will be ready by 2024, but it may be delayed until 2025,” he said.

Chrek Soknim, president of the Cambodian Valuers and Estate Agents Association, said the project is a significant achievement for the nation that will boost the economy.

“Once the new airport is finished, the real estate and construction sectors in Cambodia will attract more investors. The land around the airport has attracted a lot of investment already after it was chosen as the site of the new airport,” Soknim said.