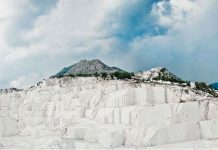 Mermeren Kombinat marble company, which belongs to Pavlidis Marble – Granite, is in the list of the 200 largest companies in North Macedonia for 2018, according to a recent announcement by the Euro Business Center Skopje. The categorization was based on turnover as well as profitability. In terms of profitability, Mermeren ranks 8th out of 200.

The present year began with difficulties for the marble industry, which was reflected in the financial performance of the companies. Especially in the first half of 2019, sales declined dramatically compared to the previous year, while in the third quarter, reconstruction and coverage of first-half losses was attempted.

The steady progress and rapid growth of the listed marble company is also reflected in the financial results of the nine months of 2019, which may maintain the trends of the semester, but if we compare the course of the third quarter with that of the first semester, the result leaves room for optimism. More specifically, Mermeren had nine-month sales of 23.8 million euros from 30.6 million euros in the nine months of 2018, while six months sales reached 12.6 million euros from 19 million euros. In other words, in the third quarter the company achieved sales of 11.2 million euros, which is very close to the sales of the first six months.

Everything shows that the management will confirm the estimations that the turnover of the second half will be higher than the one of the first half.

The post Mermeren Kombinat of Pavlidis Marble – Granite one of the largest companies in North Macedonia appeared first on StoneNews.eu.