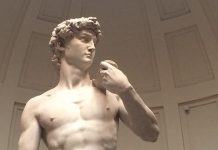 Michelangelo preceded medical science in the knowledge of blood circulation shown in his masterpiece sculpture David, a US medical expert says in a new study.

“Over 100 years before science described the mechanics of the circulatory system and therefore also of the jugular vein, Michelangelo sculpted it perfectly in his works, especially in the David”, Daniel Gelfman of the Marian University College of Osteopathic Medicine in Indianapolis, writes in Jama Cardiology. Gelfman said that in other sculptural works, and in everyday life, the jugular vein is not normally visible. “But in the Renaissance masterpiece the vein is clearly visible above David’s collarbone,” he writes.

The American doctor saw the statue in Florence this past summer and was the first to notice the detail. “The distention of the jugular can occur because of elevated intracardiac pressures and possible dysfunctions, but the David is young and in excellent physical condition so it is visible in him because of a state of temporary arousal,” Gelfman writes. “At the time of the creation of David, in 1504, William Harvey had not yet described the true mechanism of the circulatory system. That did not happen before 1628”. 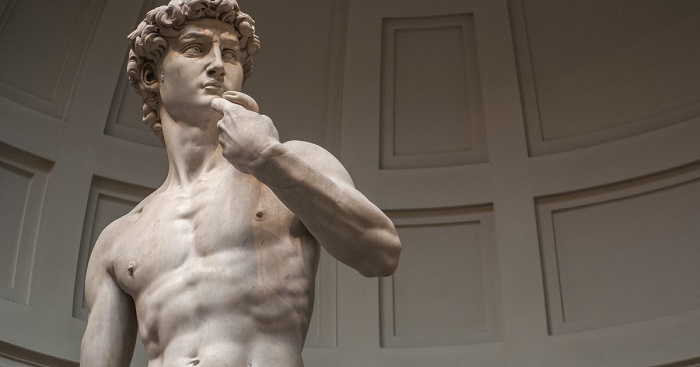 David is a masterpiece of Renaissance sculpture created in marble between 1501 and 1504, which has stunned observers over the centuries. David is a 5.17-metre (17.0 ft) marble statue of the Biblical hero, a favoured subject in the art of Florence.

David was originally commissioned as one of a series of statues of prophets to be positioned along the roofline of the east end of Florence Cathedral, but was instead placed in a public square, outside the Palazzo Vecchio, the seat of civic government in Florence, in the Piazza della Signoria where it was unveiled on 8 September 1504. The statue was moved to the Galleria dell’Accademia, Florence, in 1873, and later replaced at the original location by a replica.

Because of the nature of the hero it represented, the statue soon came to symbolize the defence of civil liberties embodied in the Republic of Florence, an independent city-state threatened on all sides by more powerful rival states and by the hegemony of the Medici family. The eyes of David, with a warning glare, were fixed on Rome.