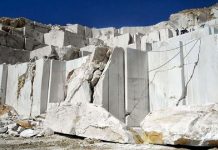 Production of marble has increased by 57 percent in Maidan Wardan province, the Afghan Ministry of Mines and Petroleum reports.

In an interview with Voice of America (VoA), the ministry’s spokesperson Abdul Qadir Mutfi said the province has produced over 46,000 tons of marbles during this fiscal year (1398), which indicates a 57 percent increase from last year’s production.

‘This year’s total production is higher by 16,883 tons than last year’s,’ said Mutfi.

The province had produced a total of 29,538 tons of marble last year.

Figures from the ministry show that Maidan Wardak has exported 1,879 squares meters of marble to Bakul, capital of Azerbaijan, and 3421 square meters to Astana city of Azerbaijan.

Meanwhile, Afghan Ministry of Commerce and Industries spokesperson Sameer Rasa told VoA that Afghanistan has exported $2.5mn worth of marble to Iran, China, Azerbaijan, Pakistan and Iraq during the first nine months of the current fiscal year.

According to estimates from the Ministry of Mines, Afghanistan has a total capacity to extract 1.5bn tons of marble.

A preliminary forecast by the presidential office indicates that the country’s marble mines are worth more than $150 billion, with about twenty-five extractive companies and 108 processing companies currently operating in the sector.