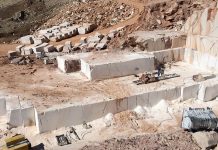 Recently, the Hilal bin Mohammed Al Busaidi CEO of the Public Authority for Mining (PAM) in Oman revealed the first package of bidding on mining sites with complete approvals. PAM has put two mining sites for investment, starting from Wednesday. The companies will be able to purchase the documents of the two sites that have been put for bidding through advertisement.

This came during a press conference held on Sunday at PAM headquarters. The CEO explained that the first bidding site is located in the Governorate of Muscat to explore for limestone, dolomite and marble, while the second site is located in the Governorate of North A’Sharqiyah to explore for marble. Both sites will be offered for public bidding through a public advertisement for local companies, as defined by the bidding regulation for mining sites and raw materials.

The CEO noted that the volume of investment in exploration and mining licenses in 2018 and 2019 amounted to about OMR700 million, adding that more than 35 mining and exploration licences were issued in 2019.

The CEO of PAM indicated that in order to prevent the irregularities, the bidding regulation for mining projects stipulated that marks have been set for the sites to ensure that the coordinates are not exceeded. Lastly, will be put in companies operating in the mining field to know the quantities extracted from minerals.