Italy to reopen factories in staged end to coronavirus lockdown 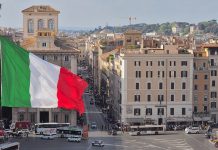 Italy will allow factories and building sites to reopen from May 4 and permit limited family visits as it prepares a staged end to Europe’s longest coronavirus lockdown, Prime Minister Giuseppe Conte said on Sunday.

More than two months after the first case of COVID-19 appeared in a small town outside Milan and following weeks of lockdown, Italy is looking ahead to a second phase of the crisis in which it will attempt to restart the economy without triggering a new wave of infections.

“We expect a very complex challenge,” Conte said as he outlined the road map to restarting activities put into hibernation since early March. “We will live with the virus and we will have to adopt every precaution possible.”

“The reopening is allowed on condition that all companies involved strictly respect security protocols in the workplace,” Conte said, adding that the reopening would lay the ground for deeper reforms of the economy in the months ahead.

The lockdown has put a strain on the euro zone’s third-largest economy, which is headed for its worst recession since World War Two. Italian business leaders have called for the restrictions to be eased to head off economic catastrophe.

Some businesses deemed “strategic”, including activity that was mainly export-oriented, could reopen this week providing they get the go-ahead from local prefects.

Exporting companies need to resume activity sooner to reduce the risk of being cut out of the production chain and losing business, Conte said in an interview with the daily Repubblica earlier on Sunday.

Rome has introduced a series of measures including state-backed loans to help businesses stay afloat. But some business officials have complained about delays in implementing them.

Conte said the government was monitoring banks to make sure state-guaranteed liquidity arrived to companies in need.

He also said the government was working on a series of measures to help industry by cutting bureaucratic red tape.

The post Italy to reopen factories in staged end to coronavirus lockdown appeared first on StoneNews.eu.