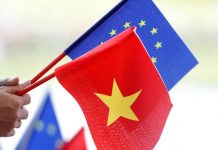 The European Commission adopted the EU-Vietnam trade and investment agreements, paving the way for their signature and conclusion. Through this adoption, the Commission is demonstrating its commitment to putting these agreements in place as soon as possible.

The trade agreement will eliminate over 99% of customs duties on goods traded between the two sides. The agreement also includes a strong, legally binding commitment to sustainable development, including the respect of human rights, labour rights, environmental protection and the fight against climate change, with an explicit reference to the Paris Agreement. It is the EU’s second deal with a member of the Association of Southeast Asian nations (ASEAN) after Singapore.

The investment protection agreement, meanwhile, includes modern rules on investment protection enforceable through the new Investment Court System and ensures that the right of the governments on both sides to regulate in the interest of their citizens is preserved. It will replace the bilateral investment agreements that 21 EU Members States currently have in place with Vietnam.

Vietnam and the EU are long-standing trading partners. At the end of 2018, EU investors had invested more than US$23.9 billion in 2,133 projects in Vietnam. They are active in 18 economic sectors, and mainly in manufacturing, electricity and real estate. As for bilateral trade, Vietnam is now the EU’s second most important trading partner among all ASEAN members.

Marble trade is one of the sectors of the bilateral economic cooperation between the two parts. Stonenews.eu, after collecting, studying and editing the statistical data provided by Eurostat, is presenting the EU’s marble export value to Vietnam in 2019, both for marble blocks and slabs as well as finished marble products, and also the shares in export value of the top three EU exporters in each category.